The Louisville Democratic County Party is 100% Volunteer run. Want to join in to make change in Louisville? Click here 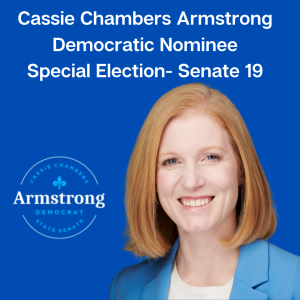 Governor Andy Beshear has accepted Morgan McGarvey’s resignation for Senate District 19 as he heads to congress.

Dear Louisville Democrats,
Governor Andy Beshear called for a special election to fill the seat for February 21, 2023. When this happens, the county party that corresponds to the district are required to nominate a candidate.

We made a call for applicants and were very proud to see such a talented and diverse group of candidates seeking to represent the 19th Senate district. Each candidate had ideas and energy to contribute to our Commonwealth, and after careful consideration, we chose Council Member Cassie Chambers Armstrong for the Democratic nomination.

Cassie is a strong legislator, and we know she will run a campaign that will be competitive— making sure we hold Senate 19 as a democratic seat. Which will be important— Republicans have made it clear that they will fight in every election, and we need to do the same.

Let’s make sure that Cassie will have all of the resources she needs to hold Senate District 19 as a Democratic seat. Donate to Cassie’s campaign below!

P.S. Curious if you are in the new Senate District 19? Click here

Do you have an event that should be on the Louisville Democratic Party Calendar? Click here!